How to Pass the Break-in Period of the Loader?

As a Construction Wheel Loaders Manufacturers, share with you. Due to the influence of factors such as the processing, assembly and adjustment of new machine parts, the friction surface is rough, the contact area of the mating surface is small, and the surface pressure is uneven. During the operation of the machine, the concave and convex parts of the surface of the parts are fitted and rubbed with each other, and the metal debris that has fallen down continues to participate in the friction as an abrasive, which further accelerates the wear of the mating surface of the parts. Therefore, it is easy to cause wear of parts during the running-in period, and the wear speed is fast. At this time, if overloaded, it may cause damage to components and lead to early failure. 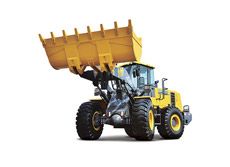 Poor lubrication Due to the small fitting gap of newly assembled parts, and due to assembly and other reasons, it is difficult to ensure the uniformity of the fitting gap. Lubricating oil (grease) is not easy to form a uniform oil film on the friction surface to prevent wear. Thereby reducing the lubricating efficiency, causing early abnormal wear of the machine parts. In severe cases, the friction surface of the precision fit may be scratched or bitten, resulting in failure.

Loosening of newly processed parts and components, there are deviations in geometry and fit dimensions, in the Chinese Wheel Loader.

In the initial stage of use, due to the impact of alternating loads such as shock and vibration, as well as the effects of heat and deformation, plus excessive wear and other reasons, it is easy to loosen the originally tightened components.

Leakage occurs Due to the looseness of the machine parts, vibration and heat of the machine, the sealing surface of the machine and the pipe joints will leak out. Some casting and processing defects are difficult to find during assembly and debugging, but due to the operation process This kind of defect is exposed as a result of vibration and impact, so it is easy to leak during the running-in period.

Many operation errors due to insufficient understanding of the structure and performance of the machine, it is easy to cause failures due to operation errors, or even cause mechanical accidents.

Since construction machinery is a special vehicle, the operator should receive training and guidance from the manufacturer, fully understand the structure and performance of the machine, and obtain certain operation and maintenance experience before operating the machine.

Pay attention to the indications of all the instruments frequently. If there is any abnormality, stop the vehicle in time to eliminate it. Stop the operation before the cause is found and the fault is not eliminated.

Our company also has XCMG Crawler Excavator for sale, please contact us.

Previous: How can I Prevent the Small Excavator Bucket from Moving Slowly?
Next: What are the Maintenance Tips for Log Grapple Excavator?
QUICK LINKS
Contact Us
Send Inquirey